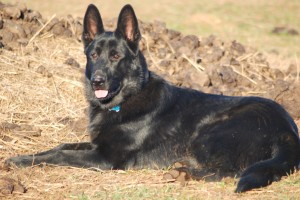 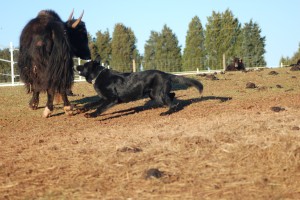 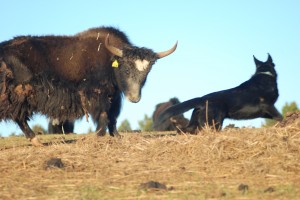 After talking with numerous people all over the world and making numerous trips to kennels all over, I met Vincent Tran.  Our common passion was an incredible all black German Shepherd working dog named Paska vom Salztalblick that had died a few years earlier.  I already had a Paska daughter (Olympia) and a Paska grand daughter (Karli aka Beauty) and Vincent had a number of Paska offspring.  Vincent became a good friend quickly and he began sharing his experience traveling all over Europe and Germany, living and spending weeks with the top breeders in all of Europe including a lot of that time in Germany, studying their methods first hand and what he learned while importing the best dogs available.  I purchased some of the top dogs from Vincent including Unkas and Beniti and Vincent helped me get additional dogs perfectly suited for my breeding program from Germany.  And so began  my breeding line, exclusively based on V Paska vom Salztalblick and consistently reproducing with almost carbon copy like accuracy using the most respected scientific method consisting of Mendalian genetics, replicas of quite possibly the best all black German Shepherd dog that has ever lived.

We have carefully selected the absolute best, all black, all German blood line, with multiple SCHH3 trained parents, grand parents and great grand parents, FH 2 tracking titled, multiple show champions and selected the finest all black off spring to which they gave birth.  Our shepherds have been bred for the highest level of intelligence, drive, stamina, disposition, protectiveness and temperament ever found in the German Shepherd breed.  These dogs are working dogs, with most of their lineage working in police, rescue or military lines of work.